“‘I think, with a little bit of magic in your life, you can do almost anything.”

From the world-renowned Pixar comes a new adventure filled to the brim with excitement, amusement, and deep heartfelt moments. While the story itself doesn’t reinvent the wheel it still serves its purpose as an entertaining animated film.

Two teenage elf brothers Barley (Chris Pratt) & Ian (Tom Holland) must set out on an adventure to spend one more day with their late father. Along the way, Ian must practice his newfound skills while their mother Laurel (Julia Louis-Dreyfus) attempts to get them back.

While the plot is straightforward, along the way are some memorable characters and beautiful locales to boot. Holland & Pratt have both shared the screen together before so it’s not surprising that they play off each other well. From beginning to end I believe in their relationship as people who truly care for each other.

Barley would do anything for his brother and it’s expressed without shoving it in the audience’s faces. Laurel also plays a bigger role than expected in the film, in fact, there weren’t any characters that bothered me while they were on screen.

Going into the film I believed it would entirely be about the two brothers but I was wrong. The movie benefits from having other characters with big roles. Even some with small roles give the film some added spectacle and its satisfying to watch play out.

From the opening shot, the audience is aware that their world is similar to ours except it’s filled with magical beasts. From unicorns digging through the trash like raccoons to centaurs riding in police cars, this magical land has been brought to the modern world.

To see these creatures placed in such an environment is refreshing it’s not where you’d expect to see them. 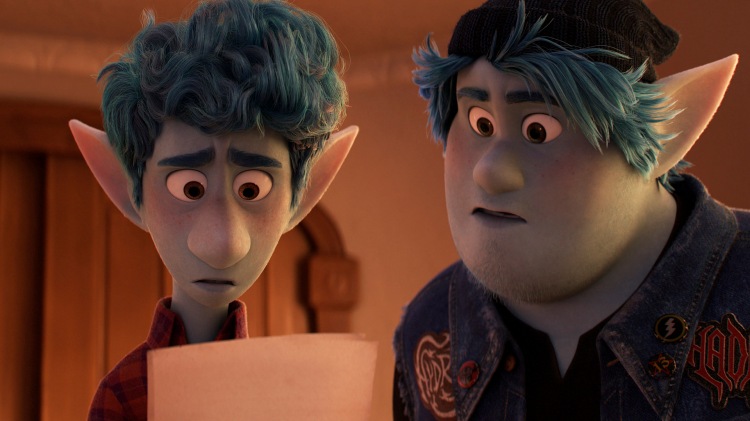 While the overall idea for the film is fresh this isn’t an animated tale that breaks the mold. At the end of the day, it doesn’t tell a story that most audiences haven’t heard before.

However, that doesn’t make the film bad the idea of a family being able to reunite with their dead father is a story that I didn’t think I’d see from Pixar. At times the film really tugs at some heartstrings and it touched my heart. That’s a mature theme that I’m sure will leave audiences surprised that the film dealt with that.

While it’s great that most will be able to connect to the movie on an emotional level that doesn’t take away the fact that there is manufactured tension between the brothers. In most animated films at some point, the main characters will have a little bit of a falling out.

Everyone watching knows that they’ll make it up to each other and it’s just a matter of time before they do. I’ll love it when one day writers decide they don’t need to have something separate from the main characters in every film. It’s just exhausting at this point.

The idea for Onward to mix the modern world with magical characters was great. With plenty of sight gags as well as all the magic sequences the film just wouldn’t be the same if the story took place during a different time.

The film is entertaining, to say the least, and the chemistry between Tom Holland and Chris Pratt is strong from the very beginning. Their characters are both some of the best parts of the film and having them on screen together makes the movie even stronger.

Onward doesn’t tell a story that most people who have seen a film before haven’t seen. Many of the story beats are copy and pasted from other films. While I’d prefer for completely new ideas most animated films do fall into the realm of not being entirely original.

Even though the film isn’t too innovative that doesn’t make it non-enjoyable. It’s fun and adventurous you feel like you’re joining the characters on their quest. Not only that you truly support the main duo because at the end of the day who wouldn’t wanna see someone special they lost even if it was only for a day.

One thought on “‘Onward’ Film Review: A Heartwarming Sense of Déjà Vu”